Binky D Diapers are sewn with love by Ashley Pavlic.

I received one of her hybrid fitted cloth diapers for review and she has graciously offered a giveaway as well.

Hybrid fitteds are a great option if you enjoy letting your little one run around coverless in cute, breathable, cotton prints for a few hours. 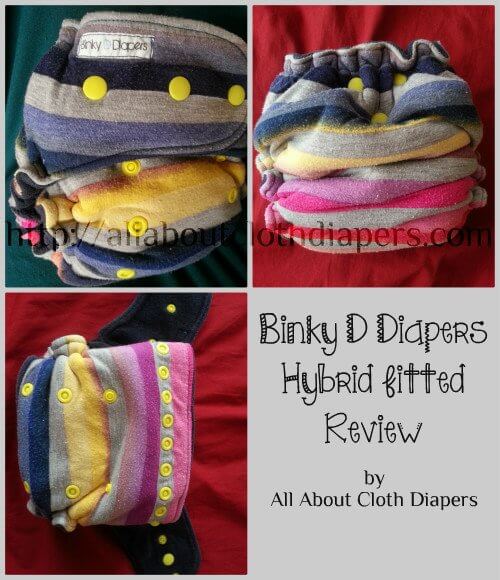 Binky D Diapers are a one-sized diaper with snap down rise settings of small, medium and large.

The benefit of a snap-down rise is more variability than you get with a fold-down rise.  You also don’t have to worry about the smooth, exposed snaps on the inner waist panel.

The inside of Binky D Diapers is made up of 2 snap in soakers both topped with cotton velour.  The lower soaker is shorter than the snake-like soaker on top.

The top soaker can be folded with the absorbency where your baby most needs it.

I had some concerns about the smooth exposed snaps on the top soaker but Camden hasn’t been bothered nor have there been marks left on his skin.

The absorbency is great, allowing Camden to run around coverless for a few hours. 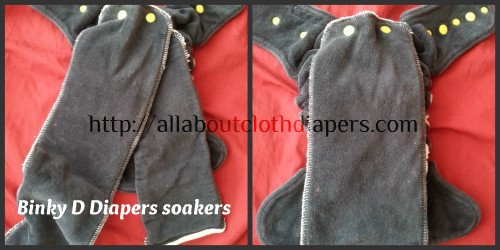 Camden wears Binky D Diapers on the largest rise setting.  This means that for a one-sized diaper it fits lower on the size scale.  Camden does not have a long rise and usually wears diapers on a medium setting.

The elastic on Binky D Diapers is tight which means good containment.  Not so tight it leaves red marks… Do you like the red marks Camden drew on himself??

The only place where the tight elastic creates an “issue” is the back.  When the soaker is snapped in it can’t lie flat.  However, I’m assuming once the diaper is on and stretched the soaker then lies flat.

I prefer a diaper that has a firm elastic to hold in the massive poos that Camden gifts me.

Binky D Diapers are average priced for a one-sized WAHM hybrid fitted at $25-$28.  Newborn diapers are priced lower than average at $15.

Overall, this is a good brand for Camden because of absorbency and fit.  When you find a diaper that fits your little one snug in all the right places you appreciate it even more.

BUY ONE!  Binky D Diapers are sold on Hyena Cart.  But, make sure and like the Facebook page for stocking announcements.  Usually 15-20 diapers are stocked each time with occasional smaller batches stocked in between.

WIN ONE!  The giveaway is for one Binky D Diaper made from any of her in-stock fabric.  You can view the fabric album on Facebook. One winner will be chosen on Monday January 21, 2013.  Please be patient if there is a delay in announcing the winner depending on when my baby decides to make his/her debut.

Always fun for me is to ask WAHMs what their go-to advice is for parents interested in cloth diapering.  Ashley’s advice:

My advice to parents who want to cloth diaper is to dive in . I researched for weeks about cloth diapering before I switched and asked tons of questions . I talked myself out of it a few times because some of the information I found made it seem like so much work . Finally I made the purchase and realized how easy and simple it was . For me it’s no more complicated than a extra load of diaper laundry 2 times a week and washing diapers isn’t nearly as daunting as clothes.