When Sophia was just a month old, I read some sad news on Facebook. The little baby boutique where I had seen my first cloth diapers and fallen in love was closing. Like many small businesses in today’s hard economy, the mom who ran the shop just couldn’t do it any more. She brought her two small children to work with her and had nursed her newborn while showing me around the store for the first time. It was bittersweet saying goodbye to that mom and her baby boutique.

She was running a going out of business sale. As many of you know, cloth diapers aren’t really ever on sale. Maybe 10% off …but not 50%!  She had a full rack of GroVia cloth diapers. These are all in two diapers with reusable shells. She had Hook and Loop, Snaps, Organic Soakers and Boosters. I bought every… single… one.

I was still using newborn diapers that I had rented (so I could try cloth out and see what brands I liked.) Most one-sized diapers are too big for newborns anyway. So I stashed these away for when Sophia was a little bigger. 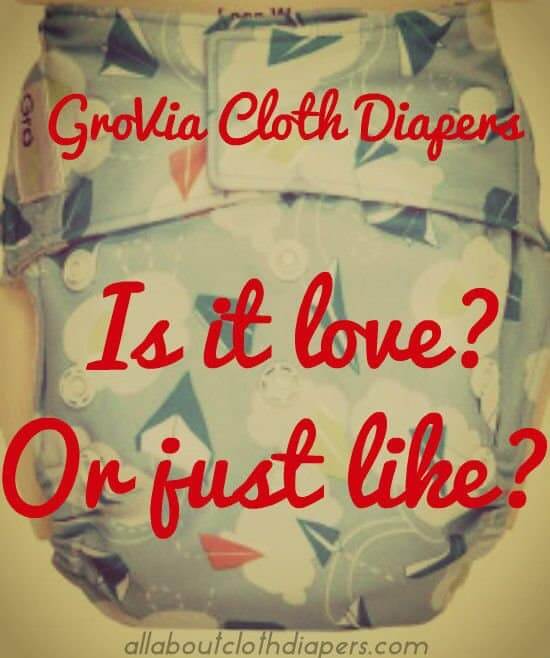 The snap-in soaker pads are waterproofed on the back. That was a big help keeping the shell dry so it could be used again. The snaps were strong, both on the closure of the shell and where the soaker snapped in. The Velcro wasn’t scratchy and actually did a pretty decent job at keeping the diaper closed. The laundry tabs worked pretty good, (which is great because that was before I discovered the loop tape trick!) There is actually a tab to tuck the laundry tab under, but I never bothered.

I liked the leg gussets on the soakers. They did a great job at keeping messes contained. Finally, the absorbency of just a soaker was never enough for us, even when Sophia was small. So we always used the boosters. With the added booster the absorbency was great while still not being too bulky. I wouldn’t say these are absorbent enough to be used overnight though.

I have since acquired a handful of the Stay-Dry Soakers and Boosters and I actually found that I liked them better than the organic ones. First, the Organic Soakers and Boosters were stained ALL THE TIME. Even the sun had a hard time getting the stains out of those suckers! Second, the organic ones took FOREVER to dry. I would even turn them inside out to help speed the process but I would literally take them out of the dryer after the cycle and then leave them on the shelf above the dryer because they were still damp. The Stay-dry’s were always dry at the end of one cycle. Anything that makes life easier is a good thing.

Fast forward to one year later…. We still use the GroVia’s. I wanted to love them, I really did. But I have to say that it is only like for now. It’s because I think they are just not wearing that well. I have a total of 6 shells, 2 are snaps and 4 are hook and loop. I am adding this after the original post, but I have a very large rotation of diapers. These shells were only washed maybe once a week, and a few less than that (some colors like the green just weren’t my favorite!) The leg elastic is shot on both of the snap closures. My favorite shell, the Hook and Loop solid purple had a strip of the hook part rip off. 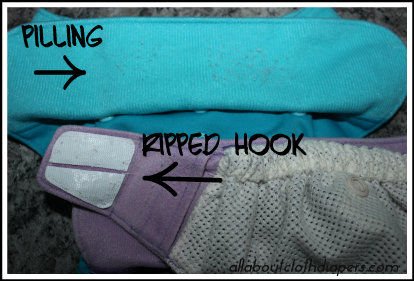 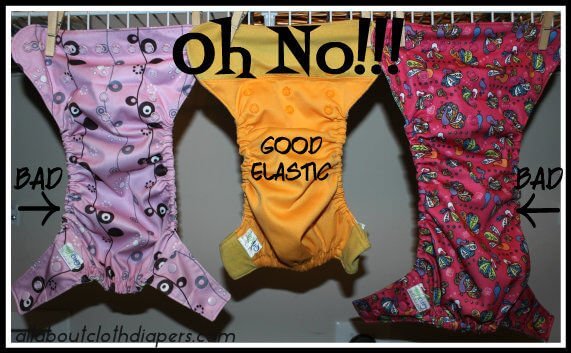 Lastly, the fabric where the hook attaches to the diaper is very pilly looking. As is much of the fabric on the solid color shells. (Let’s face it, I know these things get pooped in, but I want them to look good while they are doing it.)

I followed the directions. The shells were never put in the dryer, not even once. These seem to be an ok diaper. All the insides of the diaper are still in very good shape. I sadly can’t say the same about the shells. I guess I just wish they hadn’t suffered so much after only a year of use. I still LIKE my GroVia’s, I just don’t LOVE them.

Please don’t forget!!! We are helping to raise funds for a family trying to adopt a child.  It is going on for the next ten days. Autumn is donating all proceeds from the sales of her book, Ultimate Guide to Cloth Diapers. Each $14 donation or purchase of the book gets you one entry to a raffle for an AMAZING basket of goodies. Donate $100 and you will get 10 entries!!!! Not only can you help make an adoption dream come true for a family, you also get a wonderful cloth diaper resource and the chance to win a big basket of goodies! Here’s the link to our Adoption Fundraiser!