On January 3, 2011, Camden Elijah was born into the water. He was my biggest baby at 9lbs even. 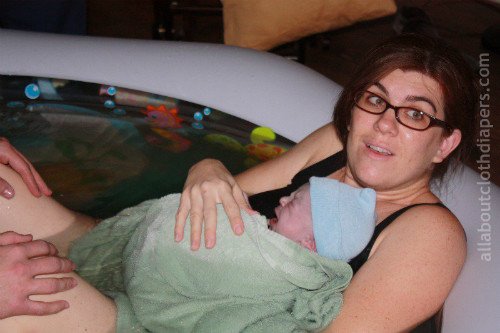 It was a great birth especially after my transport during Sterling’s birth. With every birth you grow a lot and learn something about yourself you didn’t know before. After Camden’s birth I didn’t doubt myself anymore. It took 5 births but I finally realized I will eventually make it through a painful labor.

While waiting for the arrival of my 5th child I collected some great newborn diapers! I gave you a peek into my preparations in Preparing to cloth diaper a newborn. My favorite and the one that went on Camden immediately after birth was Goodmama Double Brites. Complete and utter lusciousness in the form of a tiny diaper.

You can see photos of newborn cloth diapers on a newborn here.

Camden is a pretty easy child to parent…when he’s sleeping, eating and entertained. During those other times he’s every bit as ornery, stubborn and independent as one would expect the 5th child/3rd boy to be.

There’s no doubt those qualities will serve him well one day but at 3 it makes life loud and playful!

Camden is also a very happy boy. He’s had a big smile on his face since about 8 weeks old. We call him the bruiser but we should probably edit that to the “Smiling Bruiser”.

My goal for Camden this year is to be done with diapers at night! I got so tired of changing sheets and clothes from him flooding every single cloth diaper combo that he is now in Seventh Generation. My husband and friends take this as an opportunity to poke fun at me.

If everyone had a Camden in their life they’d certainly want more children! He has that effect on people. You just want to love on him, hold his hand, talk to him, or just stare into his chameleon blue/green eyes. He’s that awesome.

I could write a million words and post a thousand photos! Happy birthday to my sweet Cami!