The decision to cloth diaper was such a natural one for me.

It started long ago when I was just a child with a baby brother. My mother has always been so environmentally conscious, today she would have definitely been called “crunchy” back then she was called weird.

She was the mother that was stirring the giant black cauldron of tree sap in the front yard when the bus pulled up. My sister was so mortified about that, it has become a funny story that we all tell at family gatherings.

Looking back I see that my mother was ahead of her time.

She had the courage to nurse my three year brother in public in spite of the censure she received. She was a bedsharing, baby wearing, extended breast feeding, organic gardening mama long before it became cool.  We spent our childhood at natural food co-ops and free-ranging our 250 acre farm.

One of the things I remember was the giant pail of prefolds emanating it’s stench behind the toilet, and my mom, her long hair pulled back and her sleeves rolled up, scrubbing them to pristine whiteness.

Many years passed and in my teenage rebellion I repudiated my gentle mama and preferred the mainstream ways of my friends. I lived in town, wouldn’t touch soil, wouldn’t be caught dead in a long skirt, and told mocking stories about my mother’s bizarre behavior.

Slowly, I found myself going back the ways that I left behind. Long skirts began to appear in my closet, the urge to bake bread would hit me at odd times. My sister also found this transformation in her life. She was the first to marry and have children. I remember visiting one day and my sister showed me the diapers she had been making, beautiful diapers with snap-in soakers and water proof outers.

My sister said “these aren’t like mom’s diapers”  That was the beginning for me although I didn’t know it.

When I became pregnant I was still firmly in the mainstream camp and didn’t consider cloth diapers. But my mother’s values had permanently made it’s mark, even my brother was a cloth diaper junkie, to my surprise.

I was always the most rebellious of all my mother’s six children and used disposables for my first child.  Three years passed, and countless nieces and nephews arrived and I became pregnant with my second child.

By this time I had outgrown my teen angst and embraced my latent crunchiness. i didn’t even consider formula feeding and didn’t buy a crib. Instead I shopped for the best baby sling and considered ways to make our family bed safe for a newborn.

One day, without even consciously thinking about it, I said to my sister:”Talk to me about cloth diapers”

That was the pivotal moment.

She deluged me with information, then my sister-in-law joined in. They sent me links and pictures. Our facebook accounts had long threads devoted to cloth diapers.

I placed my order: six smartipants, twelve unbleached prefolds, several fitteds from Loveybums and…WOOL! Oh my gosh, I became a woman possessed with everything cloth and everything wool.

My postman was inundated with packages and took to emailing me when I would get five or six at a time.  I found diaper pages and diaper blogs and diaper videos on youtube. Tutorials on folding flats and sewing pockets out of flannel receiving blankets became my entertainment.

My friends laugh and admire my baby’s adorable colorful butt. I became a convert to bamboo and natural fibers and have tried my hand at sewing and dyeing fabric. I have developed a pattern and opened a business page dedicated to fluff and baby products.

It has defined me as a mother and a woman. And I have found myself following in my mother’s bare footprints, as natural and crunchy as she was, I am now. And as gentle as she is, she merely nods and smiles, and says

“I always knew you would.” 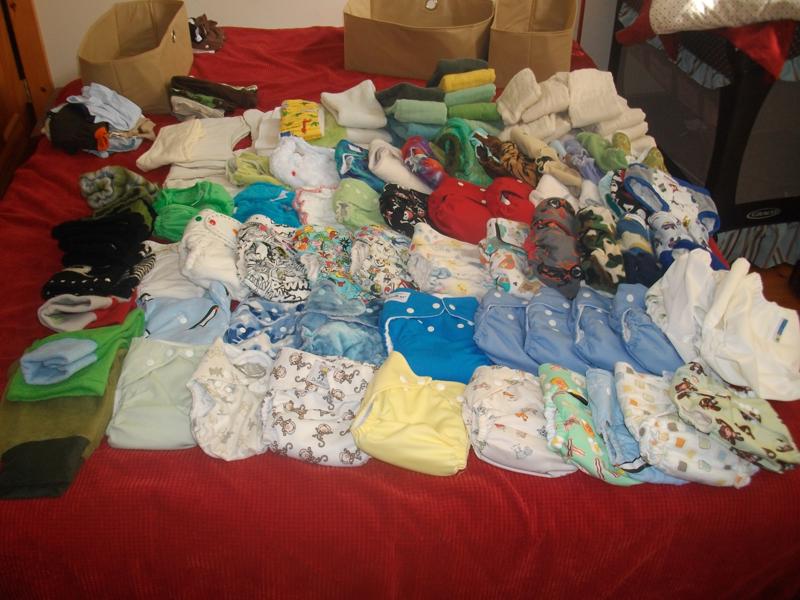