I can’t remember the last time I have so thoroughly enjoyed a Google rabbit trail.  What started out as a simple search morphed into learning about the history of modern cloth diapers and the development of disposable diapers.

Since the creation of man there has been a need for diapers.  Of course they weren’t always fabric.  Historical writings and drawings inform us that milkweed leaf, animal skins, grass and many other creative uses were employed to “diaper” a baby.

Did you know that cloth diapers were first mass produced by Maria Allen in 1887?

By the late 1800?s infants in Europe and North America were wearing the progenitor of the modern diaper. A square or rectangle of linen, cotton flannel, or stockinet was folded into a rectangular shape and held in place with safety pins. “Diaper” was originally the term for an overall pattern of small repeated geometric shapes, and then a white cotton or linen fabric with such a pattern. So the first babies’ diapers were made from diaper fabric, meaning fabric with a repetitive pattern. The first mass made cloth diapers were introduced by Maria Allen in 1887 in the United States. original post

Discovering the origination of a word may be geeky to some but completely makes me happy.

During WWII,  women flocked to work in factories to fill in the major vacancies caused by men going to war.  With mothers away at work their time to hand wash diapers became severely cramped.  In comes the diaper service to the rescue.

The diaper service, then as now, delivered fresh prefold diapers and picked up the soiled ones.

Around this time is when the first mentions of a disposable diaper surfaced.

The first disposable absorbent pad used as a diaper was probably the one made from unbleached creped cellulose tissue (held in rubber pants) in 1942 by Paulistróm in Sweden, perhaps because cotton had become a strategic material due to the war. original post 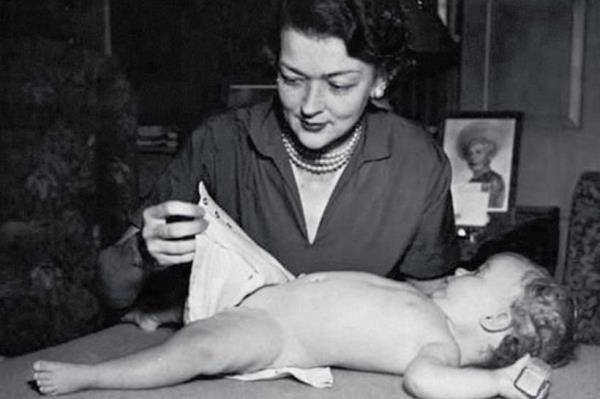 In 1946, the first waterproof cover was introduced.  Sure the Inuits were the first to use a true waterproof cover by stuffing moss under sealskin but how practical is that??  It was Marion Donovan’s frustration with wet sheets that led her to take the shower curtain down and create a diaper cover.  She then added snaps, wrapped it around the diaper and voila! Modernization hits the cloth diaper market.

Late one night in 1946, a very tired mother was faced with a wet, crying baby yet again. Changing her second daughter’s soaked cloth diaper, clothing, and bed sheets, Marion O’Brien Donovan knew there had to be a better way to keep babies dry. Soon after, she tore down the shower curtain hanging in her bathroom, cut out a section, and sat down at her sewing machine, determined to create a diaper cover that would prevent leaks. That first shower-curtain experiment eventually led to the creation of a reusable diaper cover made from nylon parachute cloth–and a collective sigh of relief from women across the United States. original post 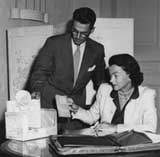 Learning about Marion Donovan has been so engrossing.  In 1999, a Lemelson Center archivist learned about the existence of Donovan’s notes, drawings, advertisements, articles and more.  The archivist then traveled to NY and had the opportunity to dig through 2 storage rooms of information in Donovan’s former apartment.  Ahh! Sounds like so much fun.

“Marion Donovan displays a package of Boaters in 1951, on the day she sold the rights to her diaper cover invention to Keko Corporation for $1 million.”

This photo is brought to you courtesy of the NMAH Archives Center of the Smithsonian Institute.

I could go on and on about Donovan but I’ll let you read up on her in the above links.

We can thank (or not) Billy Gene Harper and Carlyle Harmon for their discover of SAP (super absorbent polymer) in 1966. SAP finally made its way into U.S. disposable diapers in 1986.  (Check out the Diaper Evolution Timeline for more diaper developments.)

In 2000, Absormex, a Mexican company, released the very first bio-degradable diaper in the world.

As disposable diapers were developing from nothing to a bazillion dollar industry, cloth diapers were becoming more and more functional and convenient.

The last 3 decades have seen a huge boom in the cloth diaper industry.  In the 80’s, selection was small and, shocking as it is to imagine, available through mail-order catalogs or department stores.

We now live in a time where you can choose between 500 different colors, prints and styles of cloth diapers.  You can choose diapers made in the USA at the table of a wahm or $5 diapers from a Chinese factory. You want organic?  You can have it.  You want PUL and microfiber?  You got it.  You want rainbows and unicorn hair?  Sure, it’s yours!

It’s a good time to cloth diaper your baby.  No matter what cloth diaper style you go with you are helping the overfull landfills, providing a healthier option for your baby and even if you buy $25 diapers you are saving money!

There are so many more interesting facts about diaper development over the decades.  Please check out the links for more details.