Remember me talking about Zachary’s rash?

And the stinky diapers?

I thought I had fixed it. But it turns out I was WRONG.

Oh, boy was I wrong! 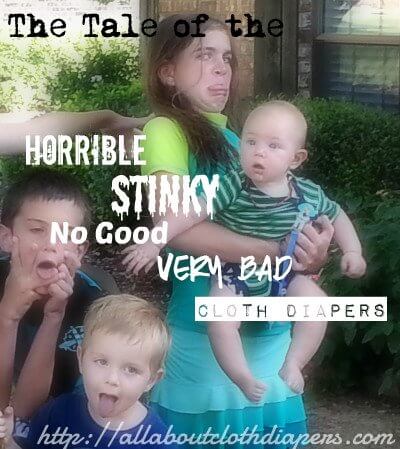 Every morning I was reminded just how wrong I was. I would literally have tears running down my face while I would change his morning diaper.

Not because I was sad, angry, happy, etc. But because the ammonia stink coming from his diaper would cause my eyes to profusely water.

Seriously, there were tears rolling down my face. Half the time I wasn’t able to see properly.

If it wasn’t bad enough that I was reminded every morning of this failure, I was also reminded again every time during the day that I changed him.

At first I thought maybe I wasn’t changing him enough. As the mother of 3 children it’s easy to become distracted (especially when one is wild and crazy like my Audrey.)

So I set an alarm on my phone, every 2 hours I changed his diaper. The stink continued.

For sure, it must be ammonia, so I tried grapefruit seed extract and Rockin’ Green’s Ammonia Booster. The stink continued.

Build up? I bought some Tide. The stink continued.

My diapers were coming out out of the dryer smelling great. But as soon as he peed the stink continued.

And to make maters worse this stink was also causing my poor boy to break out.

I was throwing everything I knew of at it, and it wasn’t making any difference!

I bought some Huggies and spent the next week stripping diapers in Dawn soap and boiling water.

I thought for sure I’d fixed the problem. There wasn’t the faintest hint of ANY smell when those diapers came out of the dry.

And then he peed, and the stink continued.

Were my diapers old? My bumGenius 4.0 were about 2 years old. But their absorbancy was fine, no problems there. It was that blasted stink that needed to go!

I asked a cloth diaper group how I could solve this problem. Everyone was great and trying to help, but they were suggesting everything I had already tried. And then a wonderful ANGEL mother told me to try a bleach soak or an OxyClean soak.

I’d never heard of that one! I tend to shy away from bleach when it comes to diapers. My children all have sensitive skin, and bleached cloth can be pretty rough with their skin. But I was pretty desperate. So I soaked all my diapers (except my Nana Bottoms and GoodMama’s) in bleach water overnight. Meanwhile I had all my diapers that couldn’t be bleached in a bucket with a couple of scoops of OxyClean.

The next morning I ran a prewash (with the water that had been soaking), ran a cold wash with Tide Free and Clear, then a hot wash with an extra rinse. The diapers come out the same as they always did, no smell.

I put him in the diaper and waited for him to pee. I never thought I’d be waiting for my 16 month old to pee.

Let alone be excited for the moment that that finally happened.

I think I hit a whole knew level of “I never knew I’d…” when I was excited to sniff a peed on diaper. But excited I was, because when I took his diaper off I was not met with the usual cloud of stench that I normally was.

My eyes were dry. Luckily the diaper was not, he had definitely peed!

But there was no smell. The diaper didn’t stink!!!

The diapers that were soaked in OxyClean did just as well as the ones soaked in the bleach. The awesome mama who gave me the advice warned to not soak in both bleach and OxyClean at the same time. I have since switched to only soaking in OxyClean, I haven’t done a bleach soak since the initial soak, and the stink hasn’t come back.

I fill up the washing machine as much hot water as possible (I have a top loader), and then add a few scoops (2-3) of OxyClean, then I add my diapers. I no longer boil the water, because really, that takes forever. And I don’t enjoy taking pots of boiling water upstairs. I soak overnight, and in the morning run a prerinse, cold wash (with detergent), then hot wash with extra rinse. And then I’m done.

I am so glad that I finally found a solution to this stink, the rash that Zachary had been dealing with went away as soon as his diaper stopped having ammonia build up.

Have you ever used an Oxyclean soak or bleach soak to get rid of the stink? Has it worked?