What’s the biggest hurdle faced while trying to lure people over to cloth diapers? They think it’s gross. At first… I did too. Of course that was when I thought everything about kids was gross. Truth be told, kids are pretty disgusting sometimes and so are diapers. Before you had kids you couldn’t have imagined picking a booger out of another human being’s nose and now you do it all the time. Wiping poop off of another person’s butt? Yup…gross…but now you happily do it multiple times a day.

Who would have thought? Our younger, childless selves would have run away with our fingers pinching our noses shut because of the smell. Now it’s totally normal to pick up your child and smell their butt at a distance so small, your nose actually grazes their fluffy little tushie. 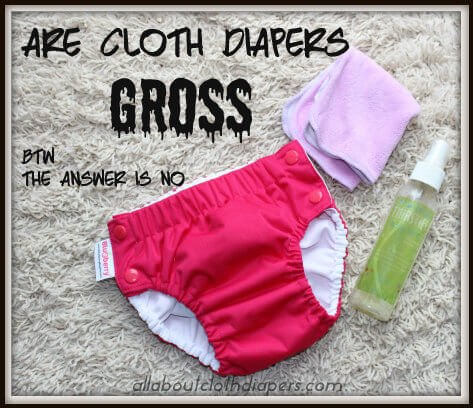 Are cloth diapers gross? Nope! Not at all!

As with anything new, there is a learning curve; user errors that can cause mishaps to happen. But cloth diapers aren’t any worse than disposables. In fact, in my opinion, they are better. Better for baby, better for the environment and absolutely adorable.

Now, with that being said, gross things can happen while using cloth diapers. But nothing worse than while using anything else! I have friends who have told me stories of blowouts their kids had that would have made me cry. Thank goodness for cloth diaper’s leg and back elastic!

Will you get poo on your hands? Probably. Cleaning poop off a baby doing the alligator death roll or a toddler who is trying to run away can get poop in places you never imagined. But again, that is the same with whatever diaper you choose.

Bad smells, boogers and dirty hands are now not even on my grossness scale. But let me tell you what is. This only happened to me once. And it is something that can only happen with cloth diapers. (Because no one is really doing it with disposables.) It could happen to you. Let my tale be your warning! Here it goes…

Changed a poopy diaper. Cleaned Sophia up. Got her dressed. Grabbed said diaper and headed to the bathroom to plop into toilet. Arrived in bathroom. Opened diaper. Nothing inside diaper. NOTHING!!!

PANIC! Where did the poop go???

I ran back to the nursery. Nothing! I quickly headed back toward the bathroom. That is when I saw it! Nestled in the corner there was my sweet daughter’s poop. Apparently it had fallen out while I was carrying the diaper to the bathroom. It bounced off the wall and settled on the floor resting up against the corner molding where the hallway meets the door. I actually had to laugh! Not why you are thinking though…

Huge shout out to my husband Mike. He happened to be home at the time and was actually super awesome about cleaning it up. I told him I already clean enough messes and thankfully, he agreed.

Have you ever had a gross cloth diapers only moment?