Written mostly by Abbie &  tested on her daughter Trixie with a few comments from Jenn.

Bambino Mio is a diaper company based in the English countryside in Northamptonshire and are the most widely used brand in the UK. They have been around for almost 20 years and are now sold worldwide. I was super impressed with the fact that Bambino Mio has won over 50 awards! Bambino Mio really wants you to try their diapers out!

Bambino Mio  sells many cloth diapering products including all in twos, all in ones, swim diapers, trainers as well as a laundry detergent, cloth wipes and liners. One cool thing about the liners…they are made of cornstarch!

All of Bambino Mio’s products are made in Europe. 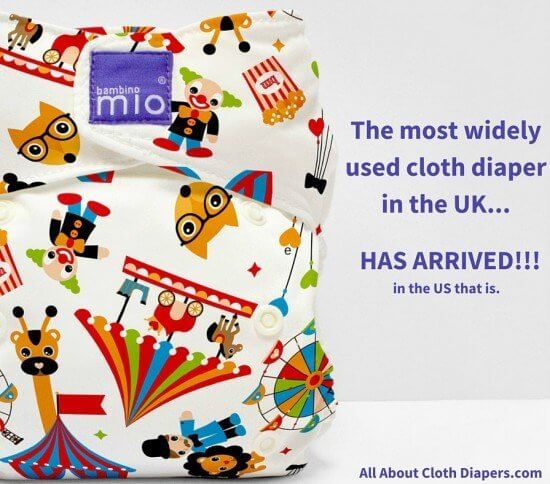 I received Bambino Mio products to review. All opinions and statements made are honest and true.

I received a lovely brown paper package tied up with purple and white string, with a stamped and personalized tag.  Fluff mail is always exciting but these simple touches really amped it up.  Inside I was delighted to find, two miosolo All in One diapers: Cheeky Monkey and Elephant Parade.  They also included two sample miowipes (their biodegradable, natural wipes), a sample of miofresh (their diaper detergent), and a generous sample of mioliners (their biodegradable, natural liners).  There was also some lovely purple sequins sprinkled throughout! 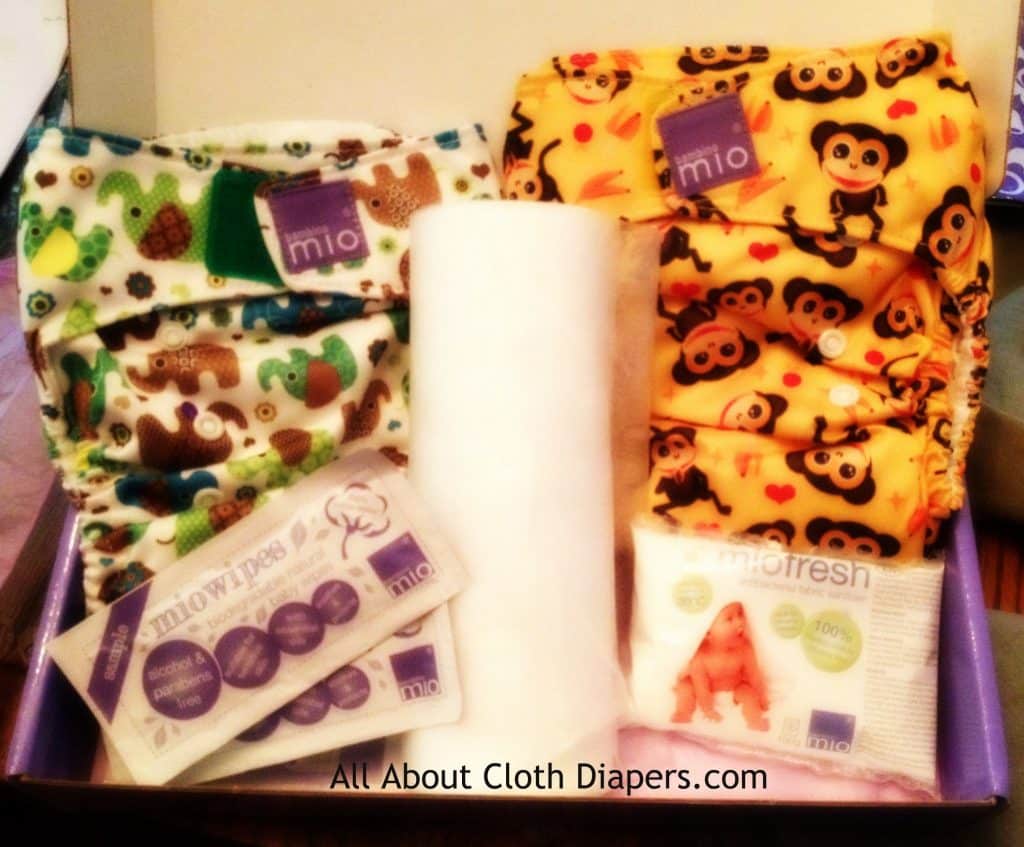 I have stashed away the sample wipes in my diaper bag, so I haven’t used them yet.  I also haven’t used the miofresh detergent yet; to be honest, my wash routine works perfectly and I didn’t want to do anything that might alter it.

We have used all the liners.  They are similar in shape to the GroVia roll of liners, but they are softer. Remember how I mentioned they were made from cornstarch! So cool!

The package arrived mid September; I promptly prepped them and on the butt they went.  Trixie was about 5.5 months old and weighed approximately 14lbs.  She is long and lean, with hardly any tummy and no chunk to her legs.  We started on the smallest rise setting and the velcro tabs met in the middle but did not overlap.  Looking at the picture I took that day, there was a little gap at her belly, so the waist probably could have been tightened up a bit for a better fit.  Trixie is now 9.5 months old and weighs 16lbs.  She seems to be on the petite side compared to my older daughter.  We are still on the smallest rise setting and still have plenty of space on the waist.

The quality of workmanship of the diapers is just lovely. The outer layer, which is polyester laminated to polyurethane (PUL), feels incredibly soft and flexible.  The inner stay dry layer is also remarkably soft.  Personally, that is what I look for in a diaper.  The hook and loop is extremely strong (one of the best I’ve tried actually) and the laundry tabs actually work (both of which are a HUGE plus). The elastic is nice and snug yet stretchy.

These are One Size (OS) diapers and are designed to fit 8-35 pounds. That will also depend on the shape of the baby as well. The inner absorbent part is 85% polyester, 15% nylon, in other words…microfiber. I’m not usually a fan of microfiber. But after so many years using cloth diapers I’ve learned, as with all fabrics, they aren’t all created equally. This microfiber hasn’t flattened with use, and it is quite absorbent. It was tested to hold 10 oz in my absorbency tests.

The diapers were just a hair big back in September (Trixie was around 14 pounds then), but now they fit very well.  We have used them for daytime, in home, out on errands or visits, and during nap times.  Everything Trixie has thrown at this diaper they have managed to contain, ebf poo and the ever lovely started food poo.  I have not used any other inserts or doublers yet.

I will add they are a bit wide in crotch area, but the diaper is squishy and flexible enough that this didn’t bother us.  When compared to my TushMate AIO it was noticeably wider, but against a BumGenius, it was almost the same width.

We’ve been using the miosolo AIOs for 4 months now.  They have been through countless washes and still look just as new. Big plus!  There is not even a hint of pilling on the inside.  I haven’t put them in the dryer, instead I prefer to use my drying rack.  It doesn’t take them overly long to dry even though they are an AIO. Also a plus!

A few things that I really love…

I was delighted to discover that the snake style insert has these tabs on it so when it comes time to wash you can really avoid getting your hands dirty by simply using the tabs to pull the insert out.  Additionally, on the other end of the tail there is a convenient small pocket just big enough for your fingers for when you need to stuff the insert inside the diaper.

The Bambino Mio miosolo AIO retails for for $21.99. New customers who sign up for for their newsletter also get a 15% discount off your first order bringing the price to $18.69.

I’m really excited to see how Bambino Mio does in the US. Have you tried any of their products yet? What did you think?