I get this question often usually in response to my recommendation to use it.

RLR is a laundry additive, not a detergent.  It is phosphate and perfume free and helps to bind to the buildup in your diapers (minerals, detergent or ammonia gunk) and strip them out.  After using RLR you will notice your cloth diapers are remarkably different, mostly in the odor department.

So what is it made of? 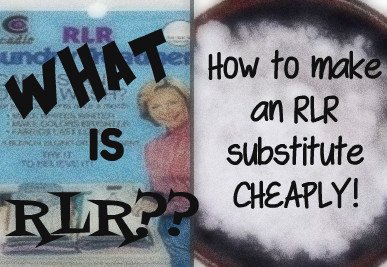 RLR is mostly washing soda. RLR is not just washing soda though.  There are also other additives that are part of their proprietary formula that cause it to suds heavily.

Sodium carbonate (also known as washing soda or soda ash), Na2CO3 is a sodium salt of carbonic acid. It most commonly occurs as a crystalline heptahydrate, which readily effloresces to form a white powder, the monohydrate. Sodium carbonate is domestically well known for its everyday use as a water softener. It can be extracted from the ashes of many plants. It is synthetically produced in large quantities from salt (sodium chloride) and limestone in a process known as the Solvay process.

How does this help you?  RLR is anywhere from $0.49-2.50 a packet.  If you have hard water and need a detergent booster often, this can add up fast.

Washing soda is cheap.  But, before you get too excited I need to tell you more.

RLR contains a highly concentrated form of sodium carbonate, more so than regular washing soda.  Where you might use 1/8 cup (packet size) of RLR to strip your diapers you would need up to 1 cup of washing soda.

Using washing soda to strip your cloth diapers will not produce the exact same results as RLR. But due to the low cost, it might be worth a try.

But, what if you don’t have any washing soda?  It’s not always easy to find.

Did you know you can make your own washing soda?

The difference between baking soda and washing soda is water and carbon dioxide. Seriously. Baking soda’s chemical makeup is NaHCO3 (1 sodium, 1 hydrogen, one carbon, and 3 oxygen molecules). Washing soda’s chemical makeup is Na2CO3 (2 sodium, 1 carbon, and 3 oxygen molecules). When baking soda is heated up to high temperatures, it breaks down to become washing soda, water steam, and carbon dioxide.
By cooking your baking soda, you can easily and safely get washing soda without needing to travel to far flung places to buy it, and you can make as much as you need at a time and don’t need to lay out a lot of money on buying washing soda. (If you buy baking soda in bulk as I do, you can make washing soda especially cheaply.)

To turn your baking soda into washing soda fill a shallow baking dish with baking soda and place in a 400 degree oven.  Stir periodically.  You will know it is washing soda by the consistency.

All of this information blew my mind.  Many parents who cloth diaper are on a tight budget and this is a perfect DIY tip!

When would you need to use RLR or washing soda on your cloth diapers?

Here are instructions on how to use RLR to strip your cloth diapers.

A little advice first, washing soda is a precipitating water softener. That means it settles out the minerals that make water hard.  The sodium binds with calcium and magnesium in the water, but it creates an insoluble substance.  If you don’t rinse your diapers thoroughly enough to remove all of the soda, it will re-deposit back onto the fabric and cause build-up.  This can actually create worse problems!

If you plan to use washing soda to clean cloth diapers I highly recommend you add a bit of your detergent when soaking. The surfactants will help the yuckies that just came out of the diapers rinse away instead of attaching back to the fabrics.

With hard water, adding washing soda to every load during just the wash cycle will help the detergent do it’s job better.

Do you use washing soda as a water softener?  What is your experience?