When I found out I was pregnant with my second child, I decided I wanted to cloth diaper. My daughter was 2.5 and still wearing diapers. I was sick and tired of paying for disposables and didn’t like how much I had spent on diapers just to throw them away. I began to look at my options for cloth diapering a newborn:

Prefolds: I did not want to use prefolds because they looked hard! I also figured it would be hard to convince my husband to use them. Plus, I would probably hurt myself using a Snappi or pins.

One-size diapers: Even though I figured I would have another big baby (my first was 9lbs 2oz), I wasn’t sure if OS diapers would fit in the beginning. I didn’t want to take that risk.

Newborn diapers: I figured these would be the best size-wise but I did not want to drop a lot of money on diapers to only use them for a few months.

Disposables: I really wanted to use cloth from the beginning because my main goal was to save money and it’s kind of hard to save money buying disposable diapers all the time. By my calculations, you would need around 1,000 disposable diapers to diaper a newborn baby for 12 weeks (12 diapers per day = 84 diapers a week; 84 x 12 weeks = 1,008). That’s a lot of diapers!

Then someone told me I could rent newborn cloth diapers. Brilliant! I rented mine from Sweetbottoms Baby, which is a local store for me but you can rent the diapers from anywhere in the country and they’ll ship them to you.  It is $215 for two dozen diapers but when you return the diapers, you get an $100 store credit, which you obviously use to buy more diapers. $115 is a great deal for 3 months worth of diapers! Sure, shopping sales and using coupons could probably get you 1,000 disposable diapers for around the same amount of money, but then that’s just 1,000 more diapers in the landfill. 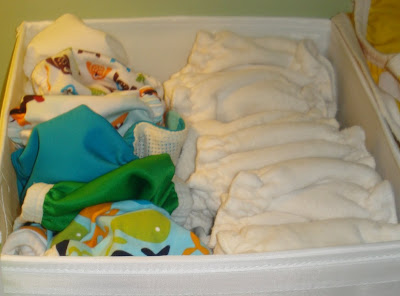 I was a little apprehensive about using fitteds since they require a cover which is one extra step, but I shouldn’t have worried at all! Changing his diapers was easy-peasy. I did have to buy covers and I figured that I would sell them after I returned the diaper rental. Well, I ended up buying some fitteds because I liked them so much!

I was right and my son was indeed a big baby (11lbs 1oz at birth!). The newborn diapers did still fit him when my rental term was up, but they would not have fit for much longer. I really think I made a good decision renting newborn diapers instead of buying two dozen diapers that I would only be able to use for three or four months.

Here is my chunky baby at one month, wearing one of the Swaddlebees fitteds and a weehuggers cover: 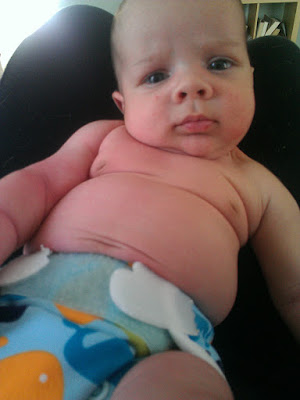